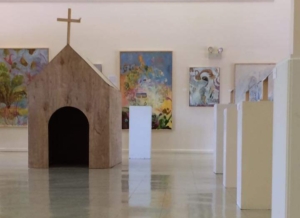 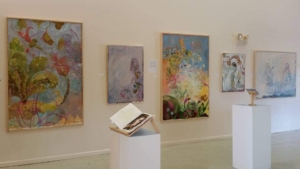 Wild boars live on Mount Subasio, and I knew I could feel them watching me with evil intentions for the American wandering in Umbria. Strange snakes, tall grasses, yellow Ginestrella, and still this place feels familiar. I was walking some of the same paths St. Francis walked some 900 years ago.

“Porziuncola, also called Portiuncula (in Latin) or Porzioncula, is a small church located within the Papal Basilica of Saint Mary of the Angels in Assisi in the frazione of Santa Maria degli Angeli, situated about 4 kilometres (2.5 mi) from Assisi, Umbria (central Italy). It is the place from where the Franciscan movement started.

Feeling his end approaching, St. Francis asked to be brought back to the Porziuncola in September 1226. On his death-bed St. Francis recommended the chapel to the faithful protection and care of his brethren. He died, in his cell, not fifteen yards from the church, at sunset on Saturday, 3 October 1226.

However this may be, here or in this neighbourhood was the cradle of the Franciscan Order. After the death of Francis, the spiritual value and the charisma of the Porziuncola became even greater. St. Francis himself pointed out the Portiuncola as a primary source of inspiration and a model for all his followers.

That Papal Basilica of Saint Mary of the Angels though. A towering tribute to humility. I chuckled.

4 am and my Italian coffee is brewed. Sitting in my studio I get to peruse images on Instagram from other parts of our planet, aesthetics strange and unfamiliar. A lot of schlep but something other than my familiar surroundings. The fog lifts slowly, and I try to paint before the fog lifts entirely

I was working what I thought may be a reinterpretation of the state of Limbo; holding a thought loosely as a point of departure into a welcome state of not knowing I was working with models in dialogues from halfway around the globe enticing the notion of Sonder, the realization that passersby endure lives as complex as my own, from a respectful distance.

My pre painting surf habit and an image of a boy lying face down by the seaside seemed disturbingly peaceful, and cognitively dissonant. I responded with a “?” And proceeded to paint as the news unfolded layer in that morning and the dark truth hit me. As a new father I saw my son and felt the sting.

Making a place for “son” became the purpose for this painting. Limbo, Heaven, or the hell of a thousand breasts, it didn’t matter anymore.

Narrative painting to me has always been about a sense of theater, the willful suspension of disbelief, but mostly a sense of wonder. Here I felt I had met the sense of the sublime ,c’est plus grande que moi, the passing of Alan Kurdi, and my own flailings at fatherhood to Truxton.

The Story Behind the Peace Prayer of St. Francis

The Peace Prayer of St. Francis is a famous prayer which first appeared around the year 1915 A.D., and which embodies the spirit of St. Francis of Assisi’s simplicity and poverty.

According to Father Kajetan Esser, OFM, the author of the critical edition of St. Francis’s Writings, the Peace Prayer of St. Francis is most certainly not one of the writings of St. Francis. This prayer, according to Father Schulz, Das sogennante Franziskusgebet. Forshungen zur evangelishen Gebetslitteratur (III), in Jahrbuch fur Liturgik und Hymnologie, 13 (1968), pp. 39-53, first appeared during the First World War. It was found written on the observe of a holy card of St. Francis, which was found in a Normal Almanac. The prayer bore no name; but in the English speaking world, on account of this holy card, it came to be called the Peace Prayer of St. Francis.

The Peace Prayer of St. Francis

Lord make me an instrument of your peace

O Divine Master grant that I may not so much seek to be consoled As to console; To be understood,as to understand; To be loved, as to love. For it is in giving that we receive, It is in pardoning that we are pardoned, And it is in dying that we are born to eternal life.

SURFACE TREATMENT: Artist’s talent comes alive in latest exhibit
This is the largest exhibit of Thomas Murray’s artwork that we’ve seen so far in the Rio Grande Valley and it remains true to the style of the artist’s output: Poetic and beautiful images undercoated with philosophical rationale.

Most of Murray’s paintings show lush combinations of nude figures engaging with exuberant plant life, with music often manifesting itself as shape on his painted surface. This exhibit, Porziuncola, currently on display at the Upper Valley Art League, was inspired by Murray’s studies in Assisi and his subsequent visit to Porziuncola where St. Francis died in 1226. A sparse wood building symbolizing that church dominates one side of the gallery.

The Franciscan inspiration for the show was made visual to viewers through a drawing of knots; “Nots” became Murray’s visual springboard. The three knots on St. Francis’s cord represented his vows of poverty, chastity and obedience.

“In this exhibition,” Murray says, “metaphor has at its core the value of negating. Something of a “Not-ness experienced. Pictures and paintings mime space, and objects are celebrated as postcards of what not to do, what not to think, how not to be.”

And this is where the show becomes a philosophical/religious/visual maze to be sifted through. “Nolo mi Tangere” is an easy place to start. An image of Mary Magdalene begs not to be tread upon. This painting also demonstrates Murray’s skill at 3-D illusionism with one side of her face demonstrating a hyper-realistic technique.

While many of his paintings embrace a softer style, I asked about this contrasting approach.

In the large painting, “The Not,” male figures toss helplessly without direction in a tangle of Murray’s musical/floral flourishes. Was this Murray’s warning to himself? Losing his focus amid the seduction of the paint itself? Then it becomes a contradiction; it is a brilliantly communicated visual lesson. Nearby, a partially completed painting, “Untitled,” speaks only of visual sound. There is also a series of small, altar-displayed and badly executed studies that line both sides of the area in front of the Porzuincola; these are ideas that Murray rejected. Are these stations?

Gorgeous works, the “Manuscripts,” contain studies of faces, and are presented in book form on sumptuous sheets of hand-pulled papers. One of Murray’s major strengths is the portrayal of the human face. Murray described sitting in his studio in the early morning hours when his role of parenting was suspended, and contacting people in other time zones whose faces he could paint.

Information sheets are posted about his myriad thoughts in Porziuncola. Although they add to the understanding of the artist’s intent, what is very clear when looking at any of Murray’s work is that he is in love with the visceral experience of painting, and his immersion in the complete and joyful act of moving paint on the welcoming surface has the power to bring the viewer along with him.

Nancy Moyer, Professor Emerita of Art, UTRGV, is an art critic for The Monitor. She may be reached at nmoyer@rgv.rr.com.

Back to Blog
works on paper, oil studies Drawings
Scroll to top